Evangelist Reinhard Bonnke, a German Pentecostal known for his mission work throughout Africa since 1967, died Dec. 7, according to a Facebook post. Bonnke founded the ministry Christ for All Nations, which has recorded “more than 77 million documented decisions for Jesus.”

Bonnke reportedly passed away peacefully, surrounded by family, and the family asks, “in lieu of flowers, to please make a donation to Christ for all Nations – Africa Crusade.”

The full eulogy, posted to Facebook by Anni Bonnke and her family, reads:

It is with sorrow that the Bonnke Family would like to announce the passing of our beloved husband, father, and grandfather, Evangelist Reinhard Bonnke. He passed away peacefully, surrounded by his family, on December 7, 2019. For the past 60 years he has preached the glorious Gospel of Jesus throughout the entire world. We want to thank you on behalf of him and our family, for your kind love and unwavering support, which enabled him to preach the matchless message of salvation to countless people.

“Great and marvelous are Your works,
Lord God Almighty!
Just and true are Your ways,
O King of the saints!
Who shall not fear You, O Lord, and glorify Your name?
For You alone are holy.
For all nations shall come and worship before You,
For Your judgments have been manifested.”
Revelation 15:3-4

On Nov. 12, Bonnke posted to Facebook that he needed prayers after undergoing a right femur bone surgery operation. “All has gone well so far, but now I have to add a few weeks of learning to walk again.” It is unclear whether complications from this operation contributed to his death.

Born in Königsberg, East Prussia, Germany in 1940, Reinhard committed his life to Jesus at the tender age of nine and soon after began telling his family he would one day serve as a missionary in Africa. In 1967, he and his young family answered that call and moved to the mountain kingdom of Lesotho, nestled deep within South Africa. Initially he was frustrated by the slow pace of salvations. But it was there that God began to give Evangelist Bonnke dreams of a map of Africa covered in the blood of Jesus and the voice of God declaring, “Africa shall be saved!”

This led him to change his approach from classic “church” ministry to large-scale evangelism. He took a leap of faith, rented a stadium… and only 100 people showed up. However, it was 100 people plus the Holy Spirit. In that first meeting, one of the attendees was miraculously healed. Word quickly spread throughout the community and by the closing session, thousands had come to hear Bonnke’s clear, impassioned preaching of the Gospel. That was just the beginning.

God continued to kiss the ministry, and in 1974 Evangelist Bonnke organized his efforts under the name, Christ for all Nations. Since then, more than 78-million people have made registered decisions to follow Christ at a CfaN Great Gospel Campaign. He has preached to some of the largest crowds ever-gathered – up to 1.6 million in a single session. Countless churches throughout the continent (and world) are pastored by leaders who first received Jesus during a Reinhard Bonnke sermon. Millions have been discipled by the more than 35 books he has written. Whole nations have turned toward godliness as a result of his courageous proclamations of truth. It is not an exaggeration to say that God has used Evangelist Bonnke to change the course of history.

In the mid-2000s, God gave Evangelist Bonnke the foresight to – in his words – “know that the baton has to be passed on to the young generation. This ministry is not my private property. It is all by God’s grace.” At the time, Daniel Kolenda was supplementing his income as a church-planter and pastor by moonlighting in the CfaN book warehouse. On a “chance encounter,” Reinhard met Daniel when walking through the office. The Holy Spirit prompted Evangelist Bonnke to ask the young man to be his personal assistant. Recognizing God’s favor and anointing on his life, Evangelist Bonnke transferred ever-increasing leadership responsibilities to Evangelist Kolenda. In 2013, Daniel Kolenda became Lead Evangelist and CEO of CfaN, though he continues to draw on Evangelist Bonnke’s experience and friendship. Evangelist Bonnke currently enjoys an active retirement that includes writing, speaking engagements and continued conversations with church leaders around the globe. He and his family do ask for your prayers as he recently underwent bone surgery – a result of age-related health issues. 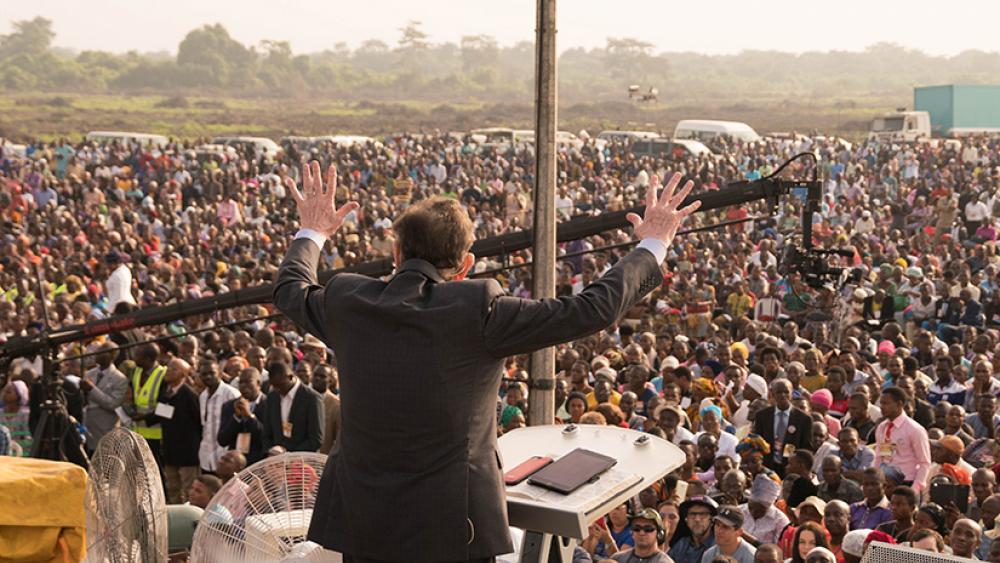 Following the news of his death, many Christian leaders took to social media to eulogize Bonnke and praise his legacy.

What could be said of my ministry if I had not loved and followed Reinhard Bonnke?

His example served as a living school, training me for ministry. His life taught me great lessons. God has and continues to use him to disciple me.

Thank you for never changing your message. pic.twitter.com/z8spexPD4I

Sad to hear of the passing of the incredible Reinhard Bonnke today, but their is joy as well. This was his view for much of his life as one of the greatest evangelists who ever lived. But today he stands before an audience of 1, and it’s the one He loved the most. pic.twitter.com/0CS3jHUlGO

Get real time updates directly on you device, subscribe now.

Why Do We Need To Go To Church Anyway?

DETAIL STUDY : THE CREATION IN GENESIS

-Click on the above image to install iOS app-

Prev Next 1 of 3
More Stories